mega888 One More to Go Before Another Summer Overhaul | BCFC

One More to Go before Another Summer Overhaul

It’s that time of year again as Blues embark on their final fixture of the season. What seemed like it was going to be a long long road has actually turned out to be quite a successful season. With a win at the Reebok on Saturday lunch time, Blues could finish as high as ninth. 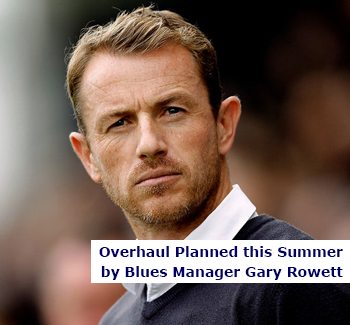 It is amazing to think where we were in November before Gary Rowett took charge and ultimately took the club by the scruff of the neck. The transition has been nothing short of miraculous and credit must go to Rowett, his back room staff and, of course, the players. But this summer is a chance for the Bromsgrove Mourinho to make a real mark on proceedings. The squad at his disposal now is still largely Lee Clark’s squad. We are led to believe (according to Panos Pavlakis) that the purse strings, despite not being rammed full of notes, are a little looser than in previous summer’s.

As seems to be the norm at St. Andrew’s nowadays, several players are out of contract meaning, inevitably, we will lose some personnel, whilst others will be offered the chance to stay. However, this may be the first transfer window in a long time that Blues cash in on players by choice. Have the likes of Neal Eardley, Mark Duffy, Mitch Hancox, Callum Reilly, Will Packwood and Olly Lee proved they are worth keeping? Only Rowett can answer that question. Then there is promising players such as Koby Arthur, Reece Brown, Charlee Adams and Denny Johnston who will be hoping for more first team action. And what are Rowett’s plans for the long term injury duo of Matt Green and Gavin Gunning?

We will undoubtedly see some new signings too. I don’t think you’ll find a single Bluenose that would be disappointed if we signed loanee’s Rob Kiernan, Robert Tesche and Diego Fabbrini permanently.

Transfer windows rarely lack activity for Birmingham City. But as we go to Bolton on Saturday and enjoy a few pre-match pints, we can bask in the knowledge that our finger nails will still exist after the 90 minutes regardless of the result – and we can sit back and enjoy the summer. What a difference a year, and a new manager, makes.

This entry was posted in Birmingham City, Rob Wildey, Tired and Weary. Bookmark the permalink.