Robbo has Earned his New Deal at Blues

It’s not often that I will praise Blues for offering a 36 year-old a new deal. However, Paul Robinson has, without a doubt, earned this 12 month contract. Yes, his performances haven’t been as solid as they once were, partly to do with him coming towards the end of his career and in football I don’t do sentiment so believe you can’t keep a player on based on past performances. But Robbo is absolutely vital to Gary Rowett’s functioning of the club in the dressing room – and that’s been said by Rowett himself. 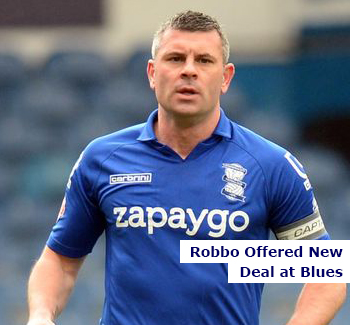 Robbo has heart and clearly cares about the club but it’s off the pitch is where he can now make a real difference. The young players in the squad have benefitted time and time again this season by having an experienced arm around their shoulder. In Football, that is priceless. And while Robbo will not play many games next term, he makes for a good back-up option in the event of injuries and suspensions.

The stick he received recently was absolutely disgraceful. Whether you like Robbo or not, and personally I find it hard not to like the bloke, giving him dogs abuse simply for being ‘too slow’ is ridiculous. I didn’t hear anyone slating Rowett for giving Robbo the task of man marking Callum Wilson against Bournemouth. That was a decision that manager got wrong – but a decision which Robbo took all the flack for. I even read the most pathetic comment on Twitter from a so called Blues fan saying “I won’t renew my season ticket if Robbo gets a new deal”. I bet this lad is best mates with the moron who threw his season ticket at Malcolm Crosby during the 8-0 drubbing only to regret it days later when Rowett was appointed manager.

There will never be a subject in Football that everyone agrees with. Frankly, that would make the game boring. And I am all for fans criticising players. But there is a line between criticism and abuse and for all the solid displays Robbo has put in for Blues in the past – performances which earned him player of the hear last season – he at least deserves respect.