Optimism at Blues Due to Gary Rowett

It’s been a while since Birmingham City fans went into a summer with optimism. Thanks to Gary Rowett, the Blues faithful can see a decent season in the pipeline. But as Rowett embarks upon his first summer transfer window in the St. Andrew’s hot seat, what can the fans expect? 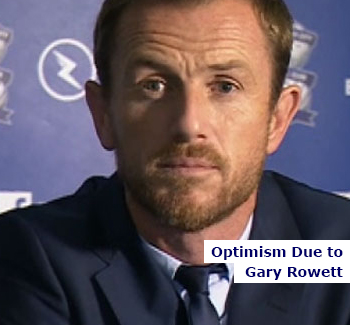 How nice it will be to be sipping a beer (or cocktail) by the pool in the baking hot sunshine reminiscing over a season that ended without any drama. Back in November, Birmingham City looked destined for League One. Lee Clark tried but miserably failed and then on the back of an 8-0 drubbing, Panos Pavlakis turned to East Staffordshire and prised Rowett away from Burton Albion. Having played for the club previously, the 41 year-old was always going to be offered time to turn it around.

Bromsgrove born Rowett was in a no-lose situation. Everyone expected Birmingham to be relegated. If that was the case, it wasn’t Rowett’s doing. But if he saved the club, he would be a hero. In reality, he did more than save the club, leading them to a comfortable mid-table finish. So, how did Rowett’s methods differ to Clark’s?

Firstly, he bought stability with his team selections. Clark was well known (and ridiculed) for playing players out of position and chopping and changing the line-up every game. Rowett found a simple system that worked (usually 4-4-1-1) and selected the players in their natural positions. Secondly, Rowett had a plan B. When things weren’t going the team’s way, positive substitutions often turned the tide. Finally, shrewd signings. Michael Morrison joined the club on a free from Charlton and was a rock at the back. The loan signings of Robert Tesche, Rob Kiernan and Diego Fabbrini gave the squad something different. Tesche transformed Blues into a better passing side, Kiernan offered versatility whereas Fabbrini was silky and a pleasure to watch.

It’s well documented that Rowett will be looking to add two or three quality signings this summer as opposed to the 426 signings Clark made (it has to be pointed out that at times he was forced to make signings due to player exits). They must start with a goalkeeper after losing Darren Randolph to West Ham and releasing the long-serving Colin Doyle. A central defender wouldn’t go amiss (Kiernan would fit the bill perfectly) and a striker to keep Clayton Donaldson on his toes.

Contrary to common belief, there are some good players already at the club. Donaldson netted 16 goals last season and Andrew Shinnie was unrecognisably impressive playing in the hole. Jonathan Grounds was a consistent performer at left-back, Stephen Gleeson grew as the season wore on and David Cotterill is more than capable if he can rediscover his form.

Rowett is nothing short of a miracle worker and although I don’t expect Blues to finish in the play-offs, another season of mid-table mediocrity would suit me just fine.